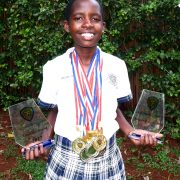 One Sunday morning last year, a young girl walked into the Children of Grace office. She was sobbing uncontrollably, tears streaming down her beautiful face. When we asked her why, she told us, heartbroken, that she had no way to go to secondary school, even though she was the highest performing student in her primary school.

COG’s scholarship program could only accommodate 12 students at the time, and when we told her that, her eyes welled up with more tears.

We were inspired by this young student’s determination, and expanded our program to give her the opportunity she so desired; education.

One year later from that day in the office, we are blown away by her achievements at Amazima Secondary School.

At their annual awards night on Wednesday, she was presented with the following, highly coveted awards:

Her name is Rizan Nakato, and she is a true example of what happens when you invest in girls education. 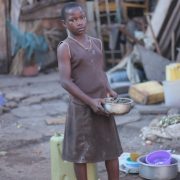 The Types of Orphans

Someone recently asked, “Are all the kids in the program orphans?” We couldn’t help but wonder how many people may have this same question. So here is the thing…

When Children of Grace first started out, our focus was to educate orphans. We then discovered that people may lie that a child is an orphan just so they can get help. Now we follow UNICEF guidelines of who is an orphan:

Children of Grace helps all types of orphans. Everyone of our children has a unique story:

Gastus, a six years old boy, lives with his mother and brother. It has been a year since his father abandoned them. His mother doesn’t have a job and is struggling to cater for their basic needs. She depends on others in her village to help feed the children. Sometimes they go hungry. She sold all the items in the house to pay school fees for the children. Now there is nothing left.

Gastus is a social orphan.

According to the US Government and UNICEF, only about 17.8 million of the 153 million worldwide orphans have lost both parents. Many maternal and paternal orphans don’t live in orphanages or other institutions. Instead they live with other relatives or community members.

If you have any questions, please email us at info@childrenofgrace.com

We love hearing from you!